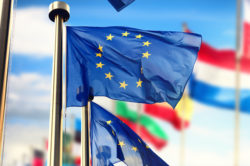 The German Focal Point of the European Agency for Safety and Health at Work (EU-OSHA) exchanged views on plans and activities in Germany and Europe at the Bundesanstalt für Arbeitsschutz und Arbeitsmedizin (BAuA) [Federal Institute for Occupational Safety and Health].

The formation of a European Labour Agency/ELA has been mentioned in reports from Europe. Even though the Council and Parliament have not yet finally agreed to the European Commission's proposal, operations are supposed to already commence in the coming year according to current plans. Construction work is due to be completed by 2023. Then the new Agency, which will be closely connected to many EU-OSHA issues, will be in modus operandi. In the future, the ELA will advise and support member states on the subject of cross-border work.

"Digitalisation and Occupational Safety" will be a central theme of the European Labour Agency's work programmes from 2019 to 2021, and will deliver a comprehensive overview of a series of projects on the state of research, policies and challenges in this sector. These include four prospective studies on the topics "Big Data for more Effectiveness in Supervision", "Artificial Intelligence at the Workplace", "Social Innovation in the Context of Digitalisation" and "Exoskeletons", which will be carried out as from 2019.

Under the motto "Healthy Workplaces", the European campaigns will run for three years. The next campaign, which focuses on musculoskeletal disorders, will therefore run from 2020 to 2022.

Successful start to Campaign in Germany

The current campaign "Healthy Workplaces – recognising and handling dangerous substances" set off to a good start after the opening event in Dortmund at the end of April. The Hazardous Substances Day in Dresden and the BAuA workshop on the substitution of chromium (VI) compounds taking place in January 2019 contribute to the campaign. Further events are planned. Up until 15th December 2018, companies protecting their employees from hazardous substances in an innovative and demonstrably effective way, can participate in the competition of the current campaign.

Three discussion evenings with films, which were awarded the Agency's "Healthy Workplaces Film Award", were organised with EU-OSHA funding. In Potsdam, there was "Between the Chairs" in October, in Hamburg "Work hard, play hard" – an occupational safety topic. In Dortmund, the film "Before the Bridge" was shown in November, with a subsequent discussion on digitalisation in the world of work.

In the follow-up, members of the Focal Point exchanged information about developments in their organisations. The feedback they gave the Focal Point's management for its internal workings was entirely positive. A lecture on cultural diversity in occupational safety by Jana-Madeline Staupe of the Landesinstitut für Arbeitsgestaltung NRW [State Institute for Work Structuring, North Rhine-Westfalia], concluded the network meeting.

The German Focal Point, managed by the BAuA [Federal Institute for Occupational Safety and Health], represents the EU-OSHA network nationwide and acts as an interface between EU-OSHA and national occupational safety.

The FOPs are designated by the governments as official EU-OSHA representatives in the individual countries; as a rule, it is the national authorities for safety and health protection at work, which mainly contribute to the implementation of the EU-OSHA programme of work.

Every Focal Point administers its own tripartite national network comprising industrial safety protagonists and representatives of the social partners, and functions as an interface to EU-OSHA. Over and above this, the Focal Points play an active role in planning and realising EU-OSHA campaigns, and appoint national experts for the Agency's groups and seminars.

Information and applications for the EU-OSHA competition